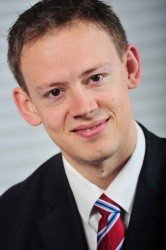 Tom joined chambers in May 2013 following the successful completion of his pupillage. He accepts instructions in all chambers’ areas of discipline.

He has enjoyed a varied civil caseload during pupillage and has been instructed in trials in breach of contract and RTA small claims matters. He has also presented bankruptcy petitions and been instructed in possession hearings as well as numerous infant settlement hearings.

Tom has appeared in a broad range of criminal proceedings as well as representing private and corporate clients in regulatory matters in the Magistrates Court. Tom has presented a taxi licensing appeal against the decision of the licensing council which was heard in the Magistrates Court and appeared on behalf of a corporate client in summary proceedings in relation to alleged statutory breaches. He has prosecuted numerous trials on behalf of the Crown Prosecution Service.

Tom, who is originally from Cardiff, was called to the bar in 2011. He was educated at Bishop of Landaff High School, Cardiff and the University of London (his degree was in Veterinary Sciences at the Royal Veterinary College, followed by a law conversion at Cardiff University). He then undertook the Bar Vocational Course at Cardiff Law School.

Following the BVC, From September 2010 – April 2012 Tom was a paralegal in the public law (family) department with Nicoll Denvir & Purnell based in Cardiff. Whilst there he developed considerable practical experience of care proceedings which he is keen to enhance at the Bar.

Senior clerk Michael Lieberman and his team are amazing and go above and beyond. The clerks there are fabulous.
- Chambers & Partners UK Guide