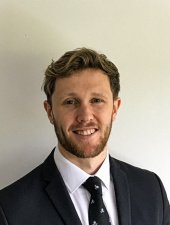 Joseff joined Chambers as a tenant in September 2018 following the successful completion of his pupillage.

Joseff is originally from Llandovery and was educated at Llandovery College. A keen rugby player, he went to Loughborough University to study English, representing the university rugby team and graduating with First Class Hons. Joseff completed the Graduate Diploma in Law at Cardiff University, where he was awarded the Prince of Wales Scholarship from Grays Inn, allowing him to study and then complete the Bar Professional Training Course (‘BPTC’) at Cardiff Law School.

During his Bar studies, he won the Norman Tapp Memorial Prize and was a DuCann Prize Finalist, both from Grays Inn. He is also a Grays Inn Goddard Scholar.

Before obtaining pupillage, he undertook internships in New Delhi, India and Kathmandu, Nepal in the field of human rights.

Commencing in 2021, Joseff has been awarded the Pegasus Scholarship by Inner Temple.

Joseff is a conversational Welsh speaker.

Joseff accepts instructions across all areas of Chambers’ practice areas. He regularly appears in the Family Court and has been instructed in the High Court on behalf of both parents and local authorities in care and wardship proceedings. Joseff also has extensive experience in a range of divorce and private children matters and routinely deals with complex and acrimonious applications, including cases involving allegations of sexual assault, domestic violence and parental alienation.  He is also a member of the Family Law Bar Association

Joseff has an expanding practice in employment law, regularly representing Claimants and Respondents in preliminary and final hearings. Joseff also has experience in acting and advising in medical negligence hearings and actions relating to TUPE.

Re I & I – Led by Owen Thomas QC in lengthy High Court care proceedings involving transgender children and disputed parental influence on the children’s transition.

Re E­ ­– Secured substantial and numerous findings against a parent in relation to emotional harm of the Child, and parental alienation of the other parent.

Mr H M Harran v Memory Lane Cakes Ltd: 1600349/2017 – representing a Claimant in a successful unfair and wrongful dismissal claim, where the Claimant was awarded damages in excess of £20,000.

Re T ­– Contested application made by a mother seeking to change her child’s primary education. Mother was successful at final hearing.

Mr N Batt v Dow Silicones UK Ltd: 1601395/2018 – was successful in establishing all heads of claim, including disability discrimination after the dismissal of an employee.

Re H – Successfully represented a father in acrimonious proceedings seeking to change the residence of his child from the child’s Mother to himself.

-       Bridging the Bar, a charity committed to increasing the equality of access to opportunities in the legal profession across all underrepresented groups;

-       the Lord Edmund Davies Legal Education Trust, a charity established to serve young people living in Wales or having a connection with Wales who are interested in entering the legal profession.

Joseff is also a panel member with Advocate, the Bar’s Pro-Bono charity.